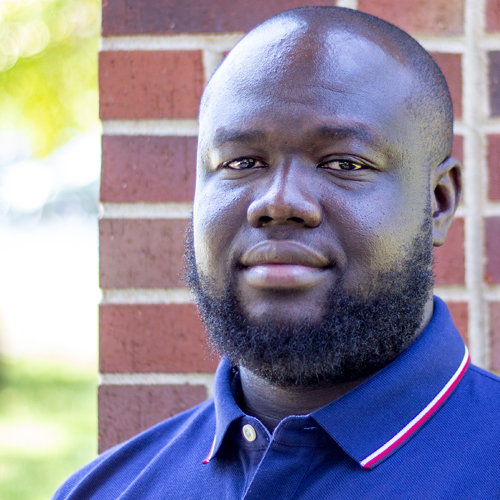 My name is Nii Djormor Sackey and this is my story:

“I was born in Ghana and have been going to Henderson Hills for three years. I was born into a Christian home and because my parents were staunch believers, going to church was never an option. Before I discovered what the true gospel is, I grew up very deep in the prosperity gospel. A gospel that considered the blessings of God to be mostly materialistic and one that related an answered prayer to having enough faith. I did not care about anybody but my own success. My goal was to go to school, be an engineer and have lots of money because I was taught in the prosperity gospel that Proverbs 10:22 is a promise when it says “It is the blessings of the Lord that makes one rich and He adds no sorrow with it.”

After four years in China spearheading the prosperity gospel movement, I came to Oklahoma to get my masters. I did not know anybody so I arranged for an airport pick up with UCO, it was a member from Henderson Hills who was sent by Jimmy Quinn to pick me up; Bradley Unruh. Brad was very nice to me and I had never seen anything like that, he gave me furniture, showed me around OK, drove me to and from wherever I wanted to go without asking me for a dime, something that rarely happens where I come from. I asked him what church he attended because I was curious and he told me Henderson Hills.

During my first Sunday in church, John Wohlgemuth was doing a series on The Church and that was when my heart changed and I realized I was lost. I wanted to know more and come to a true understanding of what the gospel truly is. I started following Brad everywhere, he took me to a Bible study organized by Bill & Kathryn Spurgeon. During Bible study, I always asked Bill questions comparing and contrasting the gospel and the prosperity gospel. Then I followed him to Sunday night dinner at The House organized by Henderson Hills.

I met a man named Sam Hewes but I call him uncle Sam. He became a father figure in my life and he really laid the foundation for me. Taking time out to teach me and explain things in the gospel to me. My journey in the gospel began by reading, and asking questions about what Jesus Christ has done for me and how he has called me to live. People like the Dickinsons, the Laws, the Snellings and many others have helped me in this journey, praying and counseling me anytime I threw questions at them.

After coming to an understanding that the Gospel is not about works or what I can do to be saved or how I can get blessings from God, my life has begun to look very different. He has enabled me to meet so many wonderful people in this church who have always been there to answer questions when I needed answers.

As an act of His grace, a month ago I approached Tim Dickinson and told him I wanted to get baptized but didn’t know from where to start. We walked through a study from Bible Doctrine by Wayne Grudem and now I stand before you as a broken, repentant sinner, saved only by amazing grace of my perfect father, who will never leave me or forsake me."