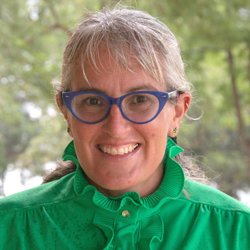 Emily stands and walks in confident peace because of God’s power and protection.

In July of 2016, Emily faced the very thing she had dreaded her whole career. In her work as a traveling forklift technician, Emily was compelled to pray a specific prayer: that she would not be paralyzed. She had no reason to think this could happen, but still, for years she whispered this prayer. On an ordinary day, doing an ordinary job, the unimaginable happened- the forklift truck fell on Emily and her back bore the weight of thousands of pounds.

“God is our refuge and strength, a very present help in trouble.”

Those who witnessed the accident were sure she had died- she did not. Medical professionals attending to her were sure she’d never walk again- she did.

Emily says, “At that moment, my first thought was that my husband Leif would have to raise our children alone. I didn’t think of money or possessions that I’d been working so hard to attain.” She soon realized though that she would not die, and her response was to praise the Lord.

“Come behold the works of the Lord,”

Emily laid in a hospital bed with her husband at her side.  X-rays were grim and showed what was surely a severed spine. A doctor came in and touched Emily’s foot. He was shocked to see that Emily not only felt his hand, but then wiggled her toes and foot! Emily says, “There was no medical explanation for why I wasn’t paralyzed. I was confident though: The Lord saved me. He spared my life. Not only that, He let me walk again.”

Emily underwent an extensive surgery. A Cadaver bone was placed, along with fifteen screws and two eight-inch rods. “My connective tissue was ripped to shreds. I had internal bleeding and received blood transfusions.” After surgery, Emily was ready to walk. The medical team urged her not to go too fast, but they were soon taken back by her ability to take steps!

The journey had just begun. Emily spent time in a hospital and then in a nursing home. She laughs and says, “I was eager to walk. I was confident I would. I insisted that my physical therapist push me harder.”

By December of 2017, Emily was not only standing, but walking. Emily says, “Today I have no pain in my back. It’s amazing. I was happy to accept living with permanent pain, I wasn’t going to complain.” Because of the power of God, and his grace and mercy on Emily’s life, she not only walks but lives with no pain in her back! Emily believes she is walking, physical proof of God’s existence. She uses her story to glorify God and attest to his amazing power and protection.

There is a river whose streams make glad the city of God, the holy habitation of the Most High. God is in the midst of her; she shall not be moved; God will help her when morning dawns. The nations rage, the kingdoms totter; he utters his voice, the earth melts. The Lord of hosts is with us; the God of Jacob is our fortress. Selah

Come, behold the works of the Lord, how he has brought desolations on the earth. He makes wars cease to the end of the earth; he breaks the bow and shatters the spear; he burns the chariots with fire. Be still, and know that I am God. I will be exalted among the nations, I will be exalted in the earth!” The Lord of hosts is with us; the God of Jacob is our fortress. Selah